While the Buddhism practiced in the countries of Asia has changed over the centuries, the iconography of the Buddha images has remained relatively constant. We are able to distinguish specific Buddhas based on their Mudras and asanas (seated postures), the context within which they are portrayed, or the attendants who accompany them. As Buddhism evolved with its varied schools, and each Asian culture chose its texts and practices, specific images types became common in different regions. The identities, the manner of depicting the Buddha statues, and the diverse materials in which they are venerated are merely touched upon.

The texts, practices, and iconography for representing Buddha images found in the Indian subcontinent continued to be used when Buddhism spread beyond its early borders, as it did in the first century CE. Gandhara lay on the Silk Route, which extended for five thousand miles from the Middle East to China and beyond. The caravan routes saw not only the transport of goods but also the exchange of ideas as traders who practiced the world's religions came together in this vast land of mountain, deserts, and high plateaus. With a firm hold in Gandhara, and a large community supporting Buddhism, the word of Shakyamuni traveled the Silk Route and found its way to China.

The transmission of Buddhism was not a systematic attempt on the part of the monastic community to spread the word but a haphazard filtering eastward that spanned centuries. From the earliest times, the Indian monks ventured north and east, bringing with them texts and oral teachings. From the Han (106 BCE-220 CE) through the Tang period (618-907), China's commercial relations followed the Silk Route. Chinese monks traveled to India to be taught by learned acharyas (teachers), and then returned home to transmit what they have studied. The journey was arduous and many never made the return trip, but fortunately some succeeded: many of the surviving texts have come through the Chinese. For the eleventh century, Buddhist monastic communities such as Nalanda, grown weak over time, had come to an end with the early Muslim invasions that began in the eleventh century. The destruction of the great monasteries of north India drove many monks and teachers to Tibet and Nepal, Tibet became the stronghold of tantric Buddhism and another important repository of texts. 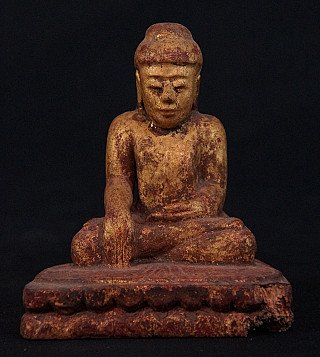 While tradition claims that Buddhism reached the countries of Southeast Asia during the time of Ashoka (third Century BCE), sculptural remains indicate a later date (fifth-sixth century) for its impact on the coastal areas of Myanmar (Burma), Thailand, Cambodia, Vietnam and Indonesia. With advances in shipping and a new understanding of the monsoon winds, trade increased and merchant traveling from the West carried Indian ideas of statecraft and religions along with their goods.

The countries of Southeast Asia share many cultural traits, but each adopted and adapted Buddhism in distinctive ways. Drawing upon different traditions within Brahmanism, Buddhism and their own indigenous cultures, and on their unique artistic styles, the Southeast Asian countries created radically divergent bodies of material. Today Myanmar, Thailand, Laos and Cambodia are Theravada Buddhist countries (with texts written in Pali), and their Theravada roots can be traced back to at least the seventh century, while a form of Mahayana Buddhism is prevalent in Vietnam. Yet, the material and inscriptional evidence proves differing influences and affiliations over the centuries.

We can conclude from the above piece that the spread of Buddhism has also helped influenced the creation of lots of Buddhist art all over the continent of Asia from the religion’s place of origin India to China, Japan and Korea. These wonderful pieces of art which are authentic and Antique Buddha statues are available in our online gallery. Visit our online catalog for more information.