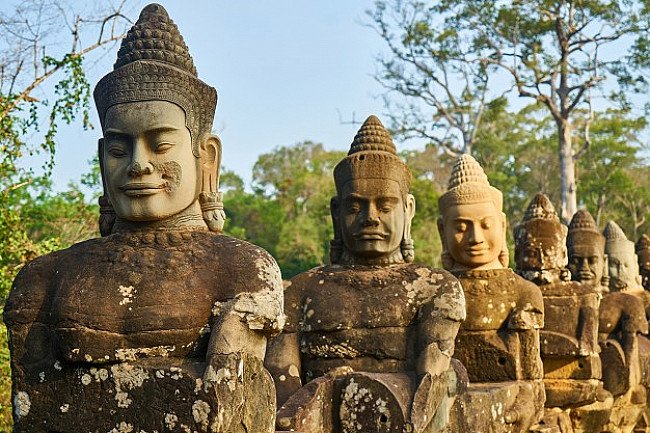 Cambodia was the center of the Funan kingdom, which expanded into Burma and as far south as 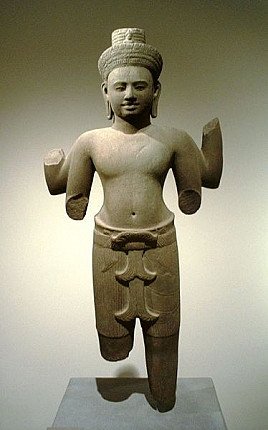 Malaysia between the 3rd and 6th centuries. Its influence seems to have been essentially political, most of the cultural influence coming directly from India. Buddhist art occurred from a very early period (sixth-seventh century) in the Mekong delta region of modern-day Cambodia and Vietnam). Stylistically, this material prefigures the Khmer art created farther inland in what is now Cambodia. The extant works suggest that Cambodia, like other regions of Southeast Asia, knew of both Early Buddhist and Mahayana practices: images of bodhisattvas coexist with those of the Buddha.

In the ninth century, Jayavarman II (802) established the Khmer Angkorian kingdom in the region around present day Siem Reap. While generally Hindu, the Khmer royalty revered their ancestors, building monuments to commemorate them. They also established temples to the various Hindu gods, particularly Shiva, with whom they identified. Material remains suggest that Buddhism continued during the extent of the kingdom of Angkor (into the fourteenth century), but it was most evident in the twelfth and thirteenth centuries, under the reign of Jayavarman VII (1181- c.1220).

A prolific builder and a Mahayana practitioner, Jayavarman VII constructed dozens of extensive temple complexes dedicated to the Buddha. One common image of the Buddha from this period depicts him with two bodhisattvas, Lokeshvara (who represents karuna, compassion) and Prajnaparamita (who represents prajna, wisdom). One tenet of Mahayana Buddhism is that one can attain enlightenment through the joining of wisdom and compassion, a belief given form in this triad (plate 39). Jayavarman’ commitment to this ideal is suggested in this construction of three temples: the firstm Ta Prohm, dedicated to his mother in the form of Prajnaparamita: Preah Khan, dedicated to his father in the form ofLokeshvara; and the Bayon, dedicated to himself. We can surmise that this last was dedicated to Jayavarman VII as the Buddha.

Sculptural reliefs at twelfth- and thirteenth-century Buddhist temples were destroyed during the fourteenth century, suggesting a period of persecution against Buddhist. One author has suggested that this was retribution carried out by Theravada Buddhists against the Mahayana Buddhism that Jayavarman VII had embraced. A more common interpretation is that Hindus persecuted the Buddhists, and recarving of some Buddha images as Shiva lingas (Shiva’s phallus) may well substantiate this second assertion. What happened will probably never known with certainty, but the fourteenth century was the period when Cambodia became a Theravada Buddhist country.

With this rich history, Cambodian Buddhist art and antique Buddha statues are rare items currently. If you are willing to get any of these rare pieces of art, do visit our online catalog.

Buddha Statues in our catalog