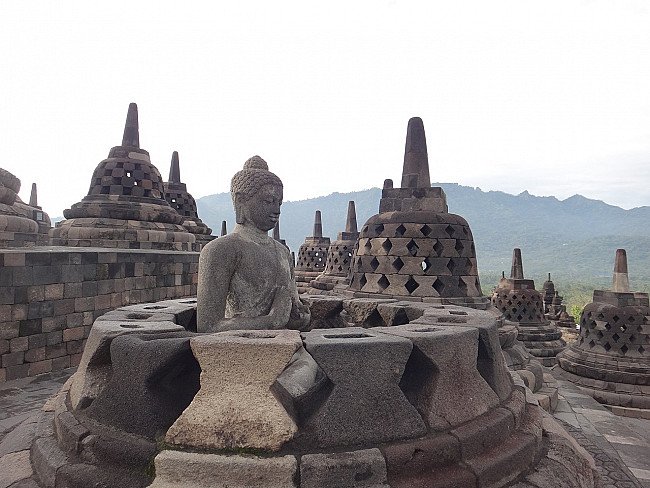 Like the rest of Southeast Asia, Indonesia seems to have been most strongly influenced by India from the 1st century AD, which is now an Islamic country. Buddhist thought must have reached coastal Java and Sumatra by the sixth century. Journals kept by Chinese and Indian monks tell of the important scholarly center of tantric Buddhism in Srivijaya, a kingdom believed to have been in Sumatra. The list of Buddhist monks (notably Atisha, Amoghavajra, and Vajrabodhi) who made their way to this center of learning includes some of the great thinkers of the time By 800 CE, Buddhism was firmly established, as indicated by the construction of the great temple of Borobudur in central Java. The bulders of this monumental stupa and other temples in the area, such as Sewu, Mendut, and Plaosan, were certainly aware of early tantric texts such as the Mahavairocana sutra, mentioned above in connection with Japan.

Extremely rich and refined architectural remains can be found in Java and Sumatra region of the nation. The most magnificent is the temple of Borobudur (the largest Buddhist structure in the world, built around 780-850 AD). This temple is modeled after the Buddhist concept of universe, the Mandala which counts 505 seated Buddha statues and a unique bell-shaped stupa that contains the statue of Buddha.

Hence, Buddha images in Indonesia include not only representations of Shakyamuni but also the transcendental Buddhas found in the countries influenced by tantric texts:
Akshobhya,
Amoghasiddhi,
Ratnasambhava,
Amitabha
and Vairocana.
With isolated images, it is not always possible to differentiate these figures from images of Shakyamuni, whose gestures are identical; but extant sets of bronze sculptures that formed mandalas indicate that the practitioners of the time sometimes intended tantric forms of the Buddha.

Temples such as Candi Jago, with its three-dimensional sculptural mandala, indicate that Buddhism was practiced up to the fifteenth century, the time of the maritime Majapahit dynasty. It is thought that by this time Buddhism and Hinduism had combined to form a syncretism practice that also incorporated the indigenous reverence for ancestors. Buddhist influences exist today only in Bali, where Hinduism with Buddhist elements is practiced, possibly not dissimilar to what we imagine in the fifteenth century.

With such a rich heritage and history, the Buddhist arts of Indonesia are rare and exquisite. If you are interested in getting any of the rare, authentic and antique Buddha statues from Indonesia, visit our online gallery on our online catalog.