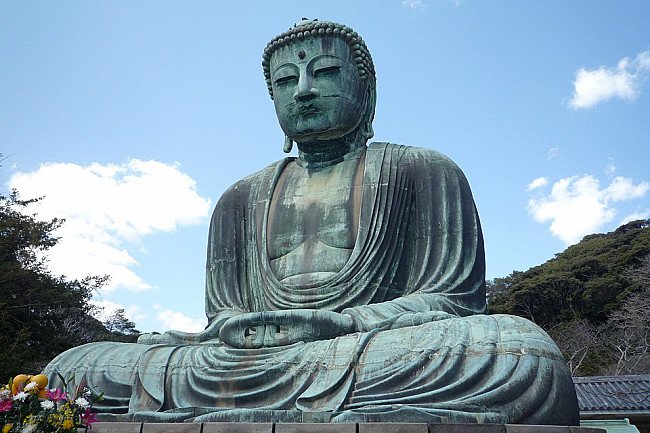 Buddhism reached Japan by the sixth century at the latest, and although it was initially in conflict with the indigenous Shinto faith, it ultimately absorbed various Shinto deities (kami), who became minor divinities. This is just one example of how Buddhism's adaptability allowed diverse cultures to embrace the religion. While it was early supported by various aristocratic families, including the Soga, Buddhism achieved a firm foothold with the royal patronage of Price Shotoku (573-622). During the Nara period (710-784) it became a state religion, and in subsequent centuries royal patronage resulted in the establishment of numerous temples. (Japan today has approximately 80,000 Buddhist temples.)

In the early eighth century, Emperor Shomu (701-756) promoted the copying of tripitaka (Japanese:issaikyo), the entire Buddhist canon. He also supported temples and clerics, while his wife was among the many court women who gave extensive support to the sangha and to the copying of sutras. Empress Shotoku (Empress Koken, 718-780) distributed the One Million Pagoda dharani (Japanese:Hyakumanto) to ten temples throughout the country. Buddhism was firmly established.

Prior to the Nara period, the Buddhism that was practiced was nonsectarian; differences arose as the study of the texts deepened. Monks embraced particular texts not only as a focus but also as a basis of their faith, and six distinct philosophical positions developed during the Nara period. By the Heian period (794-1185), the monasteries had acquired a great deal of power; in an attempt to maintain control, the royal family moved the capital from Nara to Kyoto, although this did little to weaken the monasteries' influence.

Numerous schools developed during the Heian period, in particular the Tendai and the Shingon schools. The Buddhist monk Saicho (767-822) founded the Tendai school after travelling through China and studying various traditions, including Tian tai and Chan. He synthesized these, along with elements of esoteric Buddhism and the vinaya, and like Zhiyi, Tiantai's Chinese founder, he used the Lotus Sutra as a framework for his teachings. Subsequent patriarchs of the Tendai school, such as Saicho's disciple Ennin (794-864), further refined the school's beliefs. While Tendai Buddhismincorporated the teachings of various schools, from an early period Tendai monks also engaged in the nembutsu, chanting the name of Amitabha (Japanese: Amida), a practice associated with Pure Land Buddhism.

The monk Kukai (Kobo Daishi, 774-835) brought the texts and practices that formed the basis of the esoteric Shingon school from China. He also carried with him the portraits of important patriarchs of esoteric Buddhism in China, such as Amoghavajra and Vajrabodhi-relevant because transmitted knowledge held primacy in Buddhist practice. Legend has it that Kukai threw a vajra (thunderbolt) into the air from the shores of China and subsequently set up his monastery at Mt. Koya, in Japan, where it landed.

The universal Buddha, Mahavairochana (Dainichi), is the preeminent Buddha in the Shingon school. He presides over the mandala of the two worlds (ryokai mandara), which is composed of two mandalas. One of these signifies the Womb Realm (Taizokai mandara), depicted as a series of concentric squares with an eight-petaled lotus in the center and Vairochana in the center of the lotus. The other mandala, the Diamod Realm (Kongokai mandara), consists of nine squares of equal size, which make a large square. The primary ritual objects of the Shingon school, the two mandalas are described in the Vajrashekhara sutra and the Mahavairochana sutra

During the Kamakura period (1185-1333), interest in Pure Land Buddhism and the hope afforded by Amitabha blossomed in existing schools such as the Tendai and the Shingon, particularly under the leadership of Honen (1133-1212) and subsequently Shinran (1173-1262). Honen believed that one could achieve salvation through absolute faith in Amitabha, thus offering a quick departure from this world of suffering. Hence images of Amitabha, both in his paradisiacal setting and as he descended to receive the devout into the Western Paradise (raigo), were popular topics for representation. The Bodhisattvas Avalokiteshvara and Mahasthamapratpa, the first offering lotus upon which the believer would be reborn and the latter expressing his adoration of Buddha Amitabha, accompanied him. Two other schools, the Nichirenshu (founded by Nichire, 1222-1282) and the Zen (Chinese: Chan), also emerged as important forces in the Japanese Buddhist world.

Buddhism continued to thirve during the Muromachi (1336-1573) and Tokugawa (1600-1867) periods, with and increased emphasis on the role played by the kami, spirits or deities within the Shinto religion, and their relationship to Buddhism. These figures were incorporated into and identified with various Bodhisattvas. At the same time that the interplay between the indigenous religion and Buddhism increased, the Tokugawa shonunate regularized the structure of Buddhist temples and required households to affiliate with a particular temple. With the construction of more and more temples came the production of imagery to “people” the temples.

While artists created paintings and sculptures of certain Bodhisattvas as attendants to Buddhas, other Bodhisattvas such as Avalokiteshvara (Japanese : Kannon), Kshitigarbha (Jizo), and Maitreya (Miroku), gained independent followings. Maitreya, the future Buddha, had acquired a dedicated following in Central Asia by the third and fourth centuries. He remained enormously popular into the seventh century in East Asia, and the promise of enlightenment (or at least learning the details of one's future enlightenment) if one was born after he descended from Tushita to become a Buddha, meant his continued popularity throughout Asia.

Buddhism, in Japan is still very active in Japan to this day. The regular restoration of many temples and antique Buddha statues prove that the religion is still active and the followers are more than keen to preserve their history.

If you are interested to get any of the antique Buddha statues imported from Japan, feel free to visit our online catalog.

View our Buddha statues from Japan