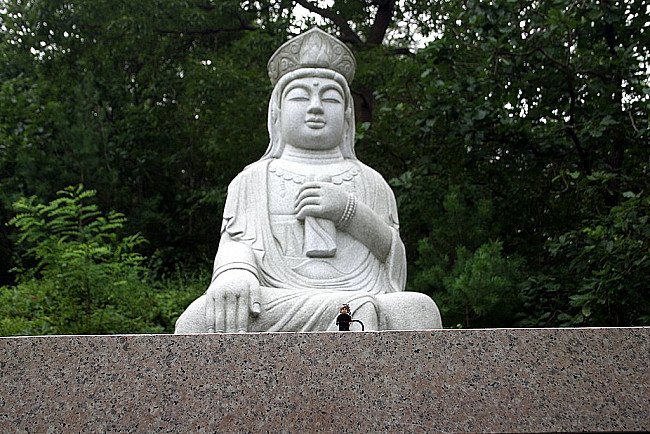 Buddhism has played an important role in Korean history; it is believed to have been introduced there from China in 372, with a monk emissary and the Former Qin court (351-394) during the Three Kingdoms period (c. late fourth century-668). The introduction of Buddhism influenced the artisans to carve and create various Buddha images and Buddha statues for veneration, architects for temples and the literate for various Buddhist sutras which transformed Korean civilization. Art of the Barbarian Tuoba was particularly important for the sophisticated art styles to Korean kingdoms. Therefore, we can clearly say that Korean Buddhist art reflects an interaction between other Buddhist influences and a strongly original Korean culture.

Goguryeo was the first of the Three Kingdoms of Korea to recieve Buddhism in 372. Later, the Baekje Kingdom embraced the religion in 384. Finally the Silla Kingdom, officially recognized Buddhism in 535 and the works of Goguryeo monks are believed to be one of the main influence for it.

While Goguryeo Buddhist art exhibited vitality and mobility akin with Northern Wei prototypes, the Baekje Kingdom was also in close contact with the Southern Dynasties of China and this close diplomatic contact is exemplified in the gentle and proportional sculpture of the Baekje, epitomized by Baekje sculpture exhibiting the fathomless smile known to art historians as the Baekje smile.

In 529 the court established a state-protected Buddhism that seems to have been a combination of Mahayana and indigenous belief.

During the Unified Silla period, Chan (Korean: Son) Buddhism and the doctrinal schools that had developed n China were introduce; the latter were consolidated into five major schools. In the subsequent centuries, the Koreans synthesized the various teachings in an ecumenical fashion not found elsewhere in Asia. During the Joseon period (1392-1910), Buddhism lost ground as new regulations sharply limited its practice and the functioning of its monasteries; this situation is still reflected in its laicization and diminished scope.

Hence, we can say that the long history of the peninsula is well supported by the constant presence of Buddhist art of the region's own peculiar style. The Buddhist art in Korea combines the values of patience, perseverance and perfection. From the art of making beautiful Buddha images to a temple complex, the above mentioned values play a vital role in Korean society.

The Buddhist art in Korea are known for delivering philosophical message. The Buddha statues are usually depicted in teaching or meditating pose, representing the potential human perfection within all of us. Hence, if you require rare, authentic and antique Buddha statues imported all the way from Korea, do visit our online catalog for more information.

View our statues in our catalog