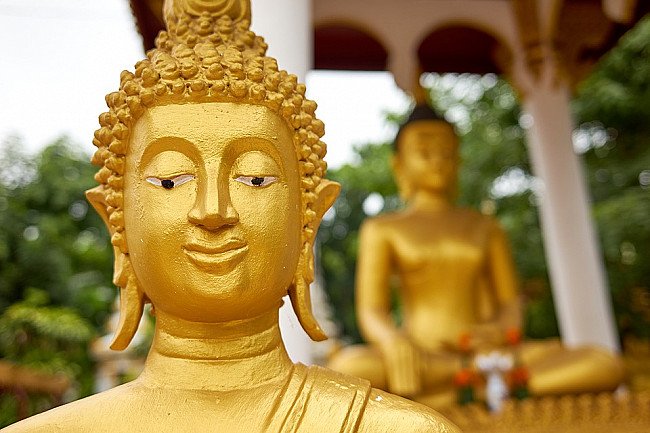 What little we know of Lao history prior to the influx of Tai in the thirteenth century indicates early connections of the Khmer in Cambodia. Theravada Buddhism is believed to have first reached Laos during the 7th - 8th Centuries CE, via the kingdom of Dvaravati. In the fourteenth century, the Thai king Mengrai, who established Lanna in northern Thailand, brought Wieng Chan (Vientiane) under his authority. In the mid-fourteenth century, the Taii ruler Chao Fa Ngum broke away from Lanna to create the kingdom of Xang (Land of a Million Elephants). For the next five hundred years, Laotian history followed an erratic course punctuated by internal upheaval and conflict with the Burmese and the Thais. Little distinguished the Theravada Buddhism practiced here from that of Thailand; hence the Buddha statues mostly depicted the Shakyamuni Buddha in Bhumisparsha mudra. In style they resemble the sculpture of Northern and Northeastern Thailand; through the facial features of later Lao Buddha images are distinctive in their delineated strength. The form that the Stupa took in Laos was also unique. Laotian people are very devout Buddhists and almost every Laotian man joins a monastery for at least a short period of time. Many men also continue to become a monk for the rest of their lives. Most people donate food to the monks to gain merit and improve their karma.

The artisans of Laos are known to have used a variety of materials in their creations of Buddhist arts. Among the metals, Bronze is probably the most common whereas; Gold and Silver are usually used for smaller Buddha sculptures. But, there are some large images which have been cast in gold, most notably the Phra Say of the sixteenth century which the Siamese carried home as booty in the late eighteenth century. The most famous Buddhist sculpture in Laos, is perhaps the Phra Bangm which is also cast in gold but the craftsmanship is held to be that of the Sinhalese people rather than of Lao origin. The relics of the Buddha are said to be contained in the image.

In Lao Buddhist art, the Buddha is always depicted with certain physical attributes along with specified dress and specified poses. Each pose consist of particular position and gestures of Buddha's hand, generally known as Mudras. These Mudras have a defined meaning which is very much familiar to Buddhists. Although the Buddha is not perceived as a god or a deity, the Buddhists in Laos tend to seek to communicate with the supernatural world through Buddha statues, making offerings to them and praying in front of them. The Buddha images are carved depicted the Buddha wearing a monastic robe. The robe may be shown as worn in the "covering mode" (draped over both shoulders) or in the "open mode" (leaving the right shoulder and chest uncovered). This robe can be taken as a representation of the Buddha's humility.

When carving a Buddha image, the artisans in Laos are expected to be in both spiritual and mental state which will enable him to visualize the ideal reality in terms of Buddhism. This may be a reason for the Buddha images to not to be identical, in fact there is a wide variety of artistic styles in representing theBuddha. Nevertheless, there are certain rules of depictions that must be adhered to while carving the Buddha.

Hence, if you are interested in getting any of the antique Buddha statues from Laos, feel free to visit our online catalog.

Beautiful Buddha statues made from Bronze