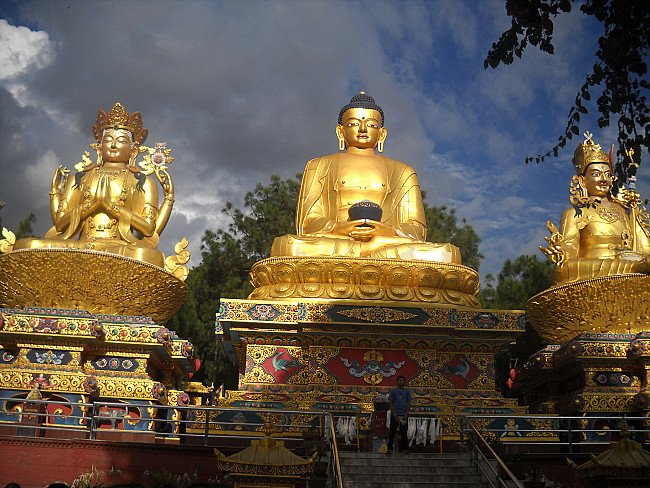 Considered a Hindu state today, Nepal came early under Buddhist influence. (In fact, the Buddha was born in Lumbini, on the southern border of present-day Nepal.) Legend has it that in the third century BCE Emperor Ashoka married his daughter to a local ruler and had stupas built in the Kathmandu Valley; there may be truth in this tale, as two Ashokan edicts have been found in southern Nepal. The Newars are now a minority in the Kathmandu Valley, but in earlier times their culture dominated the valleys; they are credited with creating most of the Nepalese art that has come down to us through the centuries. Itinerant Newar artists exerted a profound influence on the art of Tibet as well. Nepal had close commercial ties with landlocked Tibet, while shared Buddhist beliefs bound the two countries culturally.

Nepalese history is divided into five periods: the Lichchhavi (40-879/80), Transitional (879/80-1200), Early Malla (1200-1482), Late Malla (1482-1769), and Shah (since 1769). The rulers of Nepal have traditionally been Hindu, but the two faiths have resided together, with the Buddhism practiced today in the Kathmandu Valley strongly influenced by Hindu beliefs, particularly Shaiva tantra. While the religious history of Tibet is known in detail, we know less of Nepalese religious history. 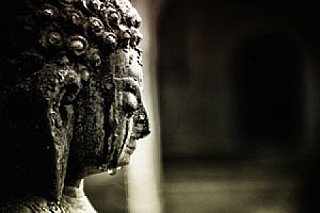 The earliest Buddhist art from Nepal dates to the Lichchhavi period, although earlier sculptural material, dating to the second century and linking Nepalese and Indian art, has been found. The great Swayambhu (self-existent) stupa of the Kathmandu Valley was probably founded at the beginning of the fifth century by the Buddhist King Vrisadeva. Images of Shakyamuni dominate during the Lichchhavi period (plate 29), but other Buddha images were created, including Amitabha and Akshobya. In the later periods, we also find Maitreya and the tathagatas who emanate from the primordial Buddha, Vajradhara or Vajrasattva. These tathagatas are associated with particular directions and colors, a specific bodhisattva, and mudras as in Tibet, but they are most often represented on stupas. The primordial Buddha is generally shown holding the ghanta(bell) and vajra (thunder-bolt), attributes that represent wisdom and compassion, which, combined, result in enlightenment.

Inscriptional evidence tells us that the tantra were known in the valley by the seventh century. One inscription records the consecration of a Yamantaka, a fierce emanation of the bodhisattva Manjushri. Still, Early Buddhism and Mahayana Buddhism probably were foremost in the region until at least the tenth and eleventh centuries, when numbers of Indian Buddhists, leaving their floundering monasteries, found their way to Nepal as they had to Tibet.

By the end of the Traditional period (1200), two important developments had occurred in the monasteries: a more highly developed hierarchy that included the vajracharya (master of the thunderbolt), and a greater secularization of the monastic community. This secularization led to the gradual diminishment of the Buddhism among the general population in Nepal, although Buddhist practice has continued into modern times. One development of the Malla period is relevant here: the Dipankara Buddha (Buddha of fixed light) became very popular. His iconography sometimes had a unique twist, for he was associated with nagas (snakes) and is often shown riding a snake; his popularity may be a result of his protection of merchants, as Newar traders were involved in commerce with Tibet. While Buddhism is still practiced today, little scholarly study is associated with it. There is a certain degree of syncretism between the Hinduism and Buddhism practiced in Nepal.

With a rich and continuing history of Buddhism, Nepali Buddhist art flourished along with the time regardless of the decrease of followers. These Buddhist arts included various Buddha Stupas, Buddha statues, Thankgas and Buddha images. The antique Buddha statues from Nepal are famous all around the globe for their originality and uniqueness in nature. Therefore, if you are interested in getting these precious pieces of history, visit our online gallery in our catalog.

View our Buddha statues from Nepal