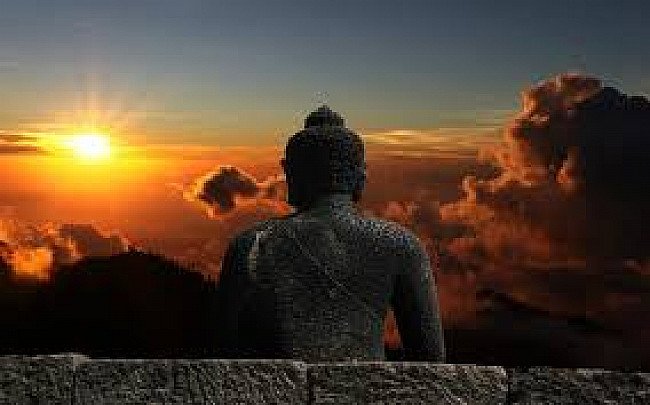 As some of Myanmar’s earliest Buddhist art can be traced back to the Mon, so can that of Thailand. Flourishing in central Thailand from the sixth to the eleventh centuries, the Dvaravati Kingdom was responsible for the establishment of large-scale stupas decorated with stuccos reliefs of the jatakas, along with stone images of the Buddha. These images draw on Indian Gupta and Orissan-stle prototypes but are uniquely Dvaravati in their sweet countenance and fluid gestures and postures. As in Myanmar, most of the remains from this period are of the Early Buddhist Schools, though Mahayana Bodhisattvas survive, often in small Bronze images. Bronze was also used for representations of the Buddha, which could be used in a small personal shrine as well as being given to a temple. 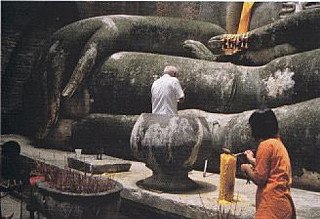 In the late thirteenth century, the first Tai states were established in Sukothai in central Thailand, and in Lana, to the north in Chiangmai. Taii peoples had slowly migrated south over previous centuries, but Kubilai Khan’s 1254 conquest of Nan-chao in Southern China may have provided a further impetus. By the middle of the fourteenth century, Sinhalese Buddhism had become the norm in Sukothai, with King Lu Thai (1347-1368/74) contributing to Buddhist texts through his authorship of the Traibhumikatha (Verses on the Three Worlds), a seminal Theravada cosmological treatise. A similar relationship with Sri Lanka was maintained in Lanna and was renewed in the mid-fifteenth century with the support of King Tilokraja.

Royal patronage is a common element in Thai Buddhism. The kings in Ayutthaya, who dominated central Thailand following the decline of the kingdom of Sukothai, were also strong supporters and proponents of Buddhism. Trailok (1442-1487) and Maha Dhammaraja (1782-1758) are notable for their commitment to the religion. The kings of the Chakri dynasty (1782-present) followed their example; King Rama IV (Mongkut, 185101868) left the monkhood after twenty-seven years to take the throne. As king, he established a reform sect that conformed to the rational principles of the Pali scriptures.

Buddhist Art like Buddha Statues and images in Thailand, as Myanmar, has traditionally relied on the life and previous lives of Buddha Shakyamuni for inspiration, and though it recognizes the seven past and Future Buddhas,  Theravada Buddhist iconography does not involve the multiplication of images found in Mahayana or esoteric Buddhism. Hence, images of Shakyamuni Buddha are abundant. Freestanding sculptures depict him seated in Bhumisparsha Mudra, and he is often depicted standing with his right hand, or both hands, in Abhaya Mudra (reassurance gesture). One popular life scene found in Thai art, but rarely elsewhere, is that of a seated Buddha in Palilay forest, teaching a monkey and an elephant. More unusual iconographic forms developed over the centuries; the Walking Buddha with one leg stepping forward and the right hand raised in Abhaya Mudra, is one form most often associated with Thailand. Another unique type portrays the Buddha with his hands down at his sides calling for rain.

From the eleventh century, the Buddha of Southeast Asia is shown crowned and bejeweled, an iconographic form that apparently contradicts his monastic vows. The effulgent splendor is variously explained. One interpretation looks to tantric influences, as certain tantric rites require the practitioner to don the garb of the Buddha as he visualizes himself as the Buddha. However, the most common explanation relates a tale in which the Buddha displayed himself in kingly finery before King Jambupati, converting that arrogant heretic to Buddhism.