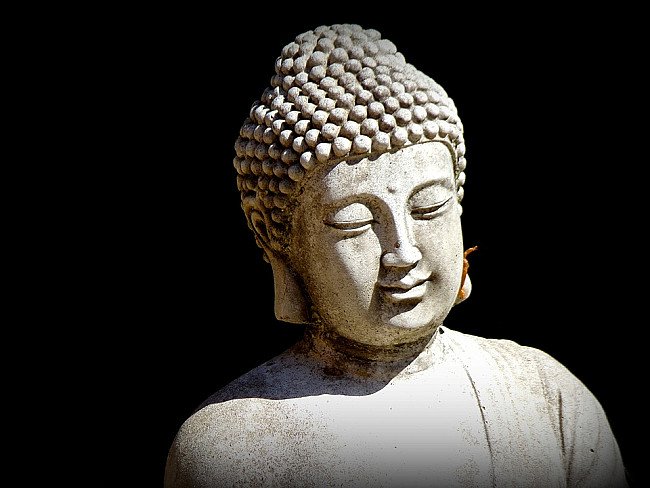 Buddhism followed doctrinally different courses in Southeast Asia and in the Himalayan region from those pursued in East Asia. This was largely a result of the texts that each region used. The contrast between Buddhism in China and Buddhism in Tibet is best understood by the fact that the Chinese translated the bulk of the texts early and schools formed around single sutras, such as the Lotus Sutra. Through the twelfth century, the Tibetans received and made use of the entire corpus of Indian Buddhist texts, and unlike the Chinese, they based their Buddhism on the shastras. 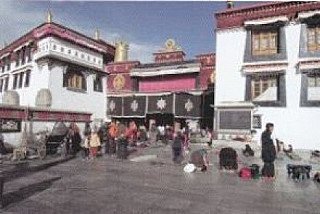 Legend says that Buddhism first arrived in Tibet in the fourth century, when Buddhist images and texts fell into the legendary palace of Yarlung principality, southeast of Lhasa. With unification of the region under the ruler Songtsen Gampo (c. 617-649), and his marriage to a Chinese princess, came the first certain image of Shakyamuni Buddha, one that remains installed at the Jokhang Temple, Lhasa, as Tibet's holiest object, known as the Jowo (Lord). The king's second wife, a Nepalese princess Bhrikuti, was also a Buddhist.

Mahayana Buddhism became more firmly established in the eighth century. King Trisong Detsen (742-c. 797) became an avid Buddhist, constructing Tibet's first monastery, Samye, with the aid of the monk Shatarakshita and the mystic Padmasambhava. Under Trisong Detsen's patronage, the Tibetans began translating and preserving Buddhist sutras (the word of the Buddha); the shastras; and the tantras (esoteric texts that offer a quicker path to enlightenment). Today these and later Tibetan translation constitute the Kanjur (bka"gyur, scriptures) and Tanjur (bstan 'gyur, commentaries), repositories of Indian texts are no longer available in their original Sanksrit. Subsequent rulers gave their royal support as well, but with the crumbling of the Yarlung kingdom in the mid-ninth century and the lack of a central authority during the next few centuries, Buddhism fell into decline.

A second period of Buddhist dissemination began in the eleventh century. One of the notable teachers of this period was the Indian Atisha (982-1054), who arrived in the kingdom of Guge in western Tibet in 1042. Along with the Tibetan monk Richen Sangpo (958-1055), who had already established monasteries before Atisha's arrival, Buddhism was revived. Atisha’s successors were affiliated with the Kadampa (Bka' gdampa) school, which was established the model for all subsequent Tibetan monastic education. The Kadampa practitioners are considered the forerunners of the Gelupu (Dge lugs pa).

With the demise of the Buddhist universities and monasteries of north India from the tenth to the thirteenth centuries, numerous Buddhist teachers found their way to Tibet, where they translator the text they had brought, thus expanding the corpus of the Kanjur and Tanjur. All the schools of Tibetan Buddhism emphasize the lineage of teachers, many of whom came from north and northwest India during this period. It was also during this time that the lama (Tibetan: bla ma), or religious teacher, became an important element in Tibetan Buddhism. Monasteries were founded; religious orders, including the Nyingmapa (Rnying ma pa), the Kadampa (Bka' gdamspa), the Sakyapa (Sa skya pa) and the Kagyupa (Bka' brgyud pa), established or reasserted themselves; and a renewed interest in tantrism arose.

While tantra, which emphasizes a speedy path to enlightenment, and the use of mantras (sacred utterances) play integral role in Tibetan Buddhist practice, Tibetan Buddhists consider themselves and practice and the use of esoteric or tantric texts; the cultivation of compassion for all living beings; and the necessity of following the path of a Bodhisattva. Each school has its specific texts and beliefs: the Sakyapa particularly venerate the Hevajra tantra; the Nyingmapa, called the “old” order, rely on the earliest translations and view the eighth-century mystic Padmasambhava as the founder of their lineael and the Kagyupa follow the six doctrines of yogic practice.

The art created by each of the schools includes figures representing distinct affiliations, most obviously in the depiction of particular lamas, notables, and deities associated with one or another lineage. Unsurprisingly, the Nyingmapa frequently depict Padmasambhava; the Sakyapa, though they integrate the Bodishattva path with a study of the Hevajra tantra, medidate on many different arch-type deities, the Kagyupa school favors depictions of Milarepa; the Gelugpa often depict Tsongkhapa (Blo bzang grags pa) and Atisha. Still, their shared beliefs mean that there is a great deal of overlap in subject matter.

This is most evident in the depiction of the five Buddha families that form the basis of tantric Buddhism, These five families are headed by the five tahthagatas (an epithet of the Buddha meaning “thus gone one” or “transcendent one”), Amitabha, Akshobhya, Ratnasambhava, and Amoghasiddhi, who are associated with the four directions, and the ultimate or universal Buddha, Vairochana. These five are depicted as a group or individually in many materials, including paintings, book covers and rituals crowns. A sixth Buddha, sometimes called the primordial Buddha, is also recognized in the form of Vajra sattva or Vajradhara. Deities who personify texts, such as Hevajra, are also fully enlightened beings and therefore Buddhas in a sense, but they are frequently depicted with a wrathful demeanor and in a dancing pose. 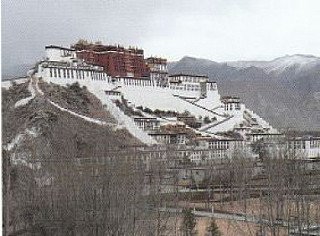 Relations with the Mongols were established in the thirteenth century, beginning a lengthy period of Sino-Tibetan exchange. In the fourteenth century, Tsongkhapa (1357-1419) founded the Gelupa order. One can trace the lineage of each of the schools in fine detail, for the transmission of the word from of the word from one teacher to the next held primacy. Meanwhile, the various schools flourished and continued to establish monasteries. The notion of a Dalai lama (oceanic guru) arose among Gelupa during the following century, but not until the period of the Fifth Dalai Lama (1617-1682) did he acquire both spiritual and temporal authority over the whole Tibet. Lozang Gatso, the fifth Dalai Lama, built the Potala, the building today stands as a symbol of secular Tibet’s allegiance to Buddhism.

The Tibetan Buddhism introduced unique artistic styles in various Buddhist arts from its inception in Tibet. This uniqueness in styles has made Tibetan Buddhist art famous all over the globe. Therefore, if you are interested in getting any of the authentic and Antique Buddha statues from Tibet, visit our online catalog to find the suitable statue or image.

View our Buddha statues in our catalog